The Falcon Banner has posted a new item, 'Calontir at 50th Year'

From June 17 to June 27, 2016, people from across the Known World gathered to celebrate the 50th anniversary of the founding of our Society.  The location was Hendricks County 4-H Fairgrounds and Conference Complex in Danville, Indiana.

The Society for Creative Anachronism got its start on May 1, 1966 in the backyard of Diana Paxson, known in the SCA as Mistress Diana Listmaker.  Paxson, and several other “founders” were attendance, and held founders meet-ups, giving anyone interested a chance to talk to the people who started it all. 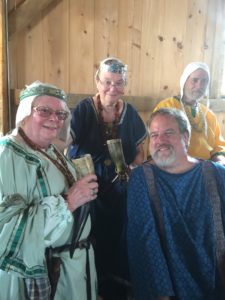 A History Hall was located in a blissfully air-conditioned building. Each kingdom was invited to put together a display of historical artifacts, information graphics and a video to help convey their kingdom’s rich history. Calontir’s display included a historic set of crowns (often called the Fleury Crowns), the warlord and consort circlets, a kingdom banner, a poster depicting the lineage of our kingdom, and several posters explaining our award structure. A video slideshow was put together of photos from the archives of Mistress Rhiannyth, who has been photographing Calontir since our days as a principality.

A memorial wall, in the hallway leading to the history hall, bore the images and heraldry of many people who have been lost to us over the years.  By the end of the week, Calontir had sadly added one more name and face to the wall.

But 50 years is only a start! Our celebration was not just about the past, but about the present and the future.  Many other activities graced this event; archery, light and heavy combat, arts and sciences demonstrations and classes, equestrian activities, a bardic stage, dancing, and shopping.

And Calontiri could be found participating in all areas. 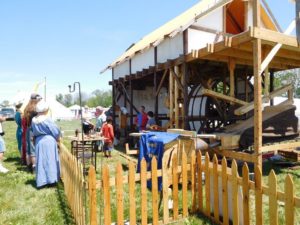 Several live demos were set up along Artisans Square, which was centrally located. A Blacksmith shop, and outdoor period cooking lab, an iron furnace, and a joiners shop garnered much attention. Calontir’s own Great Machine, commanded by our own Master Gerald Goodwine might easily have been the most popular demo on site.

The archery range provided opportunities for a variety of shoots. With the range schedule listed as “open” most days, archers did not know what to expect when they arrived to shoot! But plenty of shoots took place throughout the week.

The light weapons arena hosted two or three tournaments each day. Most were heavy rapier but several were for cut and thrust. On any given day 50 to 75 fighters could be seen in armor. Thursday was Master Alan of Darkdale’s 60th birthday. He was looking to fight 60 different people. “By the time I got to 40 my brain told me it was time to be done.” He fought several passes with each fighter so the fight total was somewhere around 200 passes with people from 16 different Kingdoms.

Lady Vashti said that after attending a Persian dance class, she was excited to give this challenging style another try. She enjoyed spending time in the Middle Eastern culture tent. 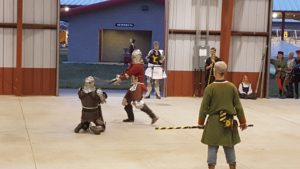 Heavy (or rattan) combat was held in both a covered building with a concrete floor and also in an outdoor arena. Each day, at least three tournaments or grand melees were scheduled. On Thursday, Herzog Hirsch won the Great Sword Tournament, which was in a round-robin style.  He also participated in a tournament to support St. Jude charity. 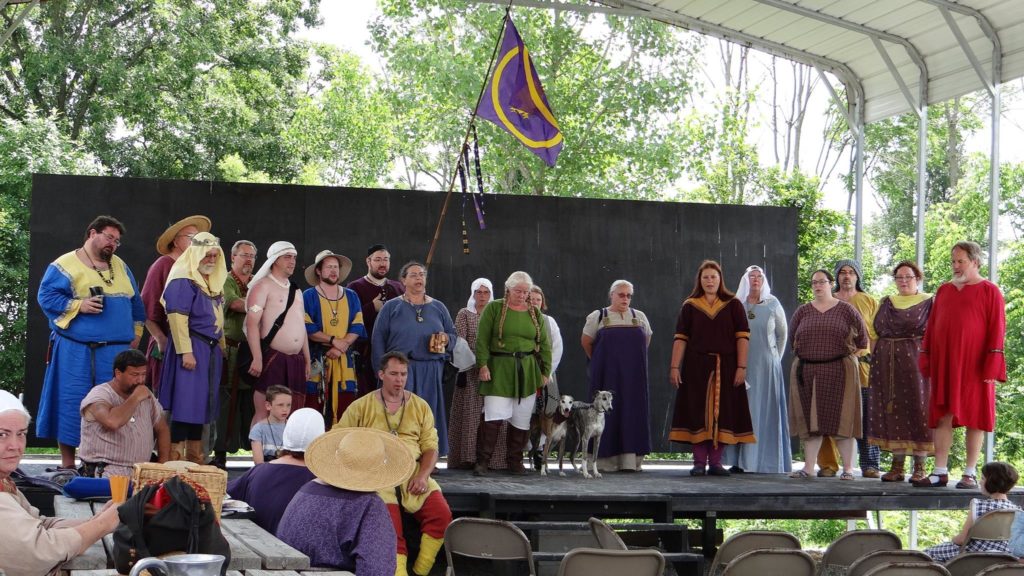 A covered stage stood along the main promenade of the event.  Plenty of open stage time allowed performers to step right up and entertain the crowd.  At other times, specific entertainers were scheduled to delight the audience. A highlight of the week was when The Three Rivers Players took turns performing with Duke Cariadoc of the Bow! Mistress Elien, of Calontir, was so excited to meet Cariadoc that she asked if he’d be in a selfie with her, and he complied, smiling.  Master Ravasz updated his iconic Newby and The Shower to include the unique characteristics of the 50-Year shower trucks. 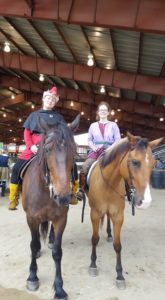 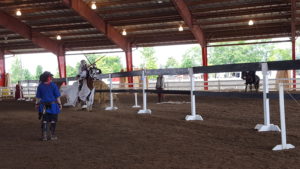 The equestrians of the Known World came out in force. Baroness Eowyth said that the number of horses in attendance more than doubled the largest number up to that point, with more than 120 horses on site. Events included games, foam and wood jousting, mounted combat, a choreographed carousel, and mounted archery, and chariot archery. The huge, covered horse arena was active from early morning to well past dark every day. Our own Duke Eringlin and Sir Saito both made it to the finals in the wood jousting tournament. And Her Ladyship Catrijn won the novice games tournament on our own Ippo Proti, Kacey!

Those Calontiri who made the trek to the SCA 5oth Anniversary Celebration seemed to enjoy themselves mightily, in the way that Calontir usually celebrates; singing. On Friday, Calontir took to the stage, accompanied by Queen Adrielle of Ealdormere, and sang in honor of Herzog Ostwald. Ending with Warrior’s Wyrd, Calontir did what we do best. We were family.

You may view the latest post at http://falconbanner.gladiusinfractus.com/2016/07/06/calontir-at-50th-year/ You received this e-mail because you asked to be notified when new updates are posted. Best regards, The Falcon Banner [log in to unmask]
-- Manage your subscription at http://listserv.unl.edu