Look at all that Meanest Mother Melee fighting!

We had enough people for tourney fighting, cut-and-thrust and archery events side-by-side, multiple-fighter melees, several meanest-mother melees and even some old style Holmgang melees. This author heard laughing and great fun coming from the list field throughout the day. Epic deaths were seen. Even Ottawa residents came to the park, set up their lawn chairs and watched the sport throughout the day, enjoying the unusually mild August weather. 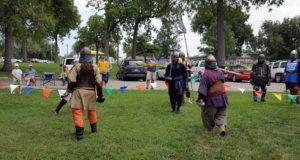 The SCA personnel put on a fine showing of our best artisanry, too. We fully encircled the list fields with pavilions full of our best displays, from scribal arts through a fully functional forge thanks for Baron Lothar! Several people combined their talents to show how wool moves from sheep to fully woven fabric, including spindles, a spinning wheel, and two kinds of looms.  Mistress Dorcas provided an entire pavilion of heraldic goodies and information, too.

An all-day chainmail demo by HL Thomas the Black, armoring, sewing, displays of the Baronial coronets, finished garb hanging in the pavilions, and lots of people willing to talk about the SCA and our period of history provided a well-rounded, educational opportunity for the Kolmar employees, their families and others who visited. Many friends and family members of the SCA folks came by to see us, too! 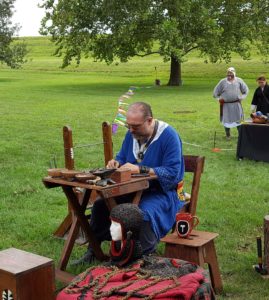 H.L. Thomas the Black and his chain mail demo

Sir Cai graciously printed outstanding informational brochures and amazing laminated SCA bookmarks for us to give to visitors during our recruitment efforts. These proved very popular with the younger set, who also enjoyed the hands-on nature of most of the demo items. Being able to touch real, hand-woven fabric, chainmail, armored fighters and heraldic banners caused more than one young mouth to gape in amazement as they saw storybooks come alive before their eyes. Lady Maegwynn provided heraldic announcements before the fighting, including explanations of the SCA – who we are, what we do, and why the visitors should come around and check out the demos. 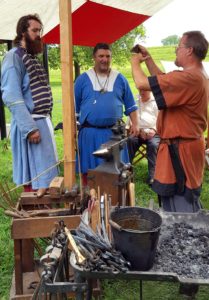 Baron Lothar explaining how he is forging his Holder Down Thing

As a reward for our demo, the Kolmar folks provided the SCA demo-ers with a luscious BBQ lunch of pork, turkey, beef and all the sides. Bounce-houses and a bounce-obstacle course for the kids were available, although us adults were sadly not allowed. We debated the wisdom of obtaining ones rated for grownups for the next Tor Party at Lilies.

It was a beautiful day of temperate weather, gentle breezes, great fun fighting and some of the best fun many of us had in a long time. We wish the rest of you had been able to join us! Enjoy the photos – I’ve linked them to my Flickr page, because I took so many. These are just a few teasers.

In joyous fealty to the Crown and People of Calontir, I remain your loyal servant and Scribe-

You may view the latest post at http://falconbanner.gladiusinfractus.com/2016/08/11/demo-saturday-august-6-2016/ You received this e-mail because you asked to be notified when new updates are posted. Best regards, The Falcon Banner [log in to unmask]
-- Manage your subscription at http://listserv.unl.edu