Other court news:
A mug was given to 1 newcomer.
Jarl Owen ap Aeddan of Ansteorra gave gifts to TRHs Ashir and Ashland
Master Gerald Goodwine and Mistress Eleanor Deyeson publicly thanked donors who helped the Great Machine go to SCA 50 Year celebration.
Sir Duncan of Skeene announced that “off head” helm inspections, to focus on padding, would begin after the first of the year.
Duke Garick von Köpke and Duchess Yasamin al-Hadiyya rained Benjamins on the Kingdom Exchequer. 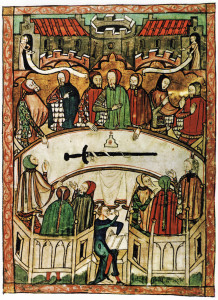 Painting of the League of the Holy Court, circa 1375. Public domain in the US

You may view the latest post at http://falconbanner.gladiusinfractus.com/2016/10/09/crown-tournament-court-summary-october-8-a-s-51/ You received this e-mail because you asked to be notified when new updates are posted. Best regards, The Falcon Banner [log in to unmask]
-- Manage your subscription at http://listserv.unl.edu