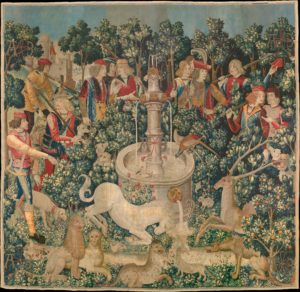 An article on time in Period by HL Lorraine Devereaux

March 25 is New Year’s Day for my persona, and for anyone who lived in Norman England during most of SCA period. March 25 also is the new year for those living in Pisa, Florence, Flanders, Brabant, Treves, Luxemburg, Lotharingia, most of France before 1100, the Papal court for a few centuries, and in Spain before 1350.

Often called Lady Day, March 25 was the Feast of the Annunciation (Feast of the Incarnation), traditionally held to be the day the angel Gabriel told the Virgin Mary she would be the mother of Jesus.

Although the Norman English still celebrated January 1 as the start of the year (as part of the Yule celebration), the actual New Year for legal and political purposes began on March 25 starting in 1155 and continuing until the reform of the English calendar in the 18th century. It was the day annual rents were paid, and later, taxes.

March 25 was a good day to start the year because originally it was the spring equinox. This was during Caesar’s time, before errors in the calendar caused the dates of the equinoxes and solstices to change. Many cultures began the year at or around the spring equinox or the winter solstice. (A few notably began the year near the autumn equinox, such as the Egyptians and Babylonians. The Jewish calendar is similar to the Babylonian calendar.)

By the 4th century, when Constantine called for reform of the Christian calendar, the spring equinox fell on March 21. Rather than take the extra four days out of the calendar, the church fathers chose to move the official equinoxes and solstices to their new dates. By then the quarter days were tied to religious holidays, and the new year did not change with the calendar.

But what about SCA folk whose personas come from other places and other times?

If your persona comes from Christian Constantinople, or from Naples and Sicily (from the 11th century on), the new year starts on September 1. That is the date the Byzantines believe the world began.

Italy is a hodge-podge of dating conventions. The Venetians begin the new year on March 1, the date used by the early Romans (before Caesar’s calendar reform) and Merovingian Franks. In the Papal court before the 10th century they used the Byzantine’s September 1 for the new year. After that they switch to March 25.

In Florence and Pisa the new year began on March 25. However in Pisa people began their anno domini dating from Jesus’s conception, not his birth. So if 2017 begins today in Florence, 2018 begins today in Pisa.

The Germans are just as divided. Before 1200 most Germans celebrated New Year’s Day on December 25, but for a brief period the Holy Roman Emperors used September 24, a date promoted by the English scholar the “Venerable” Bede (yet never used in his home country).

During the 13th century the Germans for the most part use March 25. But during the 14th and 15th centuries many parts of what will be Germany switch back to December 25. The exceptions are Treves, Luxemburg and Lotharingia. They stay with March 25.

Flanders and Brabrant also stay with March 25, except during some scattered periods when they use Easter like their neighbors in France. During the latter half of the 16th century many Germans adopt January 1 as their New Year’s Day.

The Spanish use March 25 for the most part, until around 1350, when they switch to December 25 for a couple of centuries. Beginning in 1556 the Spanish adopt January 1 as the date of the new year.

If your area of Europe wasn’t covered, most likely your persona celebrated New Year’s Day on December 25 or March 25. Some Eastern European countries, as well as Persia, parts of India and parts of central and southern Asia, celebrate the new year on or near the spring equinox.

And of course after 1582, when Pope Gregory reforms the calendar, most of Catholic Europe switches to January 1, the date Caesar chose nearly 16 centuries earlier. By the end of SCA period all of Catholic Europe and even a few Protestant countries switch to January 1. The English (including the American colonies) won’t make the change until 1752. Turkey, Greece and Russia finally adopt the Gregorian calendar in the early 20th century.

You may view the latest post at http://falconbanner.gladiusinfractus.com/2017/03/25/happy-new-year/ You received this e-mail because you asked to be notified when new updates are posted. Best regards, The Falcon Banner [log in to unmask]
-- Manage your subscription at http://listserv.unl.edu