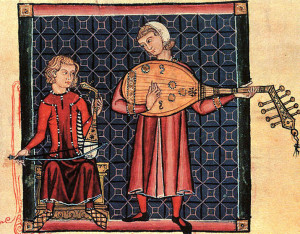 Unknown Artist. Minstrels with a Rebec & a Lute.
13th c. Manasseh Codex. El Escorial, Madrid. Public domain in the US

For those Calontiri who remember His Grace Duke Conn MacNeill, the bard king of Calontir, two albums of his songs are now available on Google Play.  The albums, Visitacions de la Muse Polyhymnia and Valor d’Amor, recently became available for purchase and download.

Visitacions contains many songs older Calontiri will recall fondly, and several that remain classics and are sung around the fire to this day. The album was originally a cassette tape, and the recording quality shows it. But for those who want to hear “Rite of Passage” or “Crown and Kingdom” sung by the laurel bard who wrote them, it won’t matter in the least.

Valor is much better technically, and continues to demonstrate His Grace’s talents as a songwriter and singer. “Captive Heart” is an especially pleasant surprise for those who did not follow Conn’s work after his departure.

You may view the latest post at http://falconbanner.gladiusinfractus.com/2017/04/18/duke-conn-macneills-albums-available-on-google-play/ You received this e-mail because you asked to be notified when new updates are posted. Best regards, The Falcon Banner [log in to unmask]
-- Manage your subscription at http://listserv.unl.edu