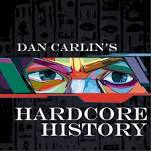 In the most recent episode, posted in August 2017, Carlin takes a long, long look at indigenous tribal people up against the encroachment of technologically superior or organizationally superior cultures. After a long preamble, he launches into a discussion of Julius Caesar’s wars in Gaul, which he’s titled “The Celtic Holocaust.” His contention is that, unlike African or Native American tribes, “These people had a chance to win” even though they were “never the betting favorites.”

He points out that the Celts, Gauls and Germans were able to field large armies. Disease hadn’t ravaged the local populations the way it did in the Americas. And their weapons and warfare were similar, although the Romans had some missile technology the tribes didn’t. He also notes that the Romans had superior armor. But what they had most was organization.

This episode is fascinating, and Carlin backs everything up with either original source material (translations of Caesar’s works, and he notes which translation he’s using) or the opinions of experts in the subject. Sometimes he’ll read a passage from Caesar’s work, then follow it with a look at the Roman political situation. Why did Caesar want to focus on this aspect or exaggerate that number? What did it gain him back home? And where do Caesar’s justifications wear thin?

This is the only episode I’ve listened to so far. Carlin only issues two or three new episodes every year. The most recent ones are anywhere from five to seven months apart. But he makes up for this with very long episodes. Episodes 56-58 look at the ancient Achaemenid Persian empire. Those three episodes total nearly 13 hours. Episode 60, “The Celtic Holocaust” is just a few seconds shy of six hours.

It wasn’t always like this. Wikipedia says his first episode in July 2006, “Alexander Versus Hitler,” was only 16 minutes long. The next 15 episodes ranged from a half hour to just shy of an hour. After that they ranged from two to five hours in length.

Most of these are no longer available unless you purchase them from his website. Episodes 50 through 60 are available on iTunes, Stitcher and so on, as well as on his website, for free. A compilation of episodes 1-49 is $69.99, although you can purchase smaller groups of podcasts for $4.99 to $9.99. He also sells “extras,” the stuff that didn’t make it into an episode, for $1.99 each, such as “Wrath of the Khans” to accompany episode 47. (For the life of me, I can’t understand what didn’t make it into a five-episode, 8.5-hour topic.) Carlin also has a place to donate on his site, although he only mentions it at the end of the episode – very low key.

Carlin’s Hardcore History is wildly popular. Each new episode is downloaded by millions of people. And if you like the kind of long-form history that compares conditions in one time or place with another, or with contemporary issues, you’ll appreciate Carlin’s take.

At one point he notes that Caesar’s forces were blindsided in an ambush and wonders if Caesar had been killed then, would Rome’s borders have stayed much smaller? Without Caesar, would there have been an empire at all? He asks what would have happened if the Europeans in the Americas had faced a 100,000-strong native army. Would “manifest destiny” have occurred? Such thought arguments weave through his material.

At another point he implores his listeners to “imagine the human suffering” that followed a siege. He remembers the women and children, and what happens to them when their side loses. He asks what would you give your life for? Is freedom worth it? Is it worth the threat of imprisonment, slavery, rape, torture or death? He notes the Gauls risked all for freedom from Rome and went from being political slaves to actual slaves. 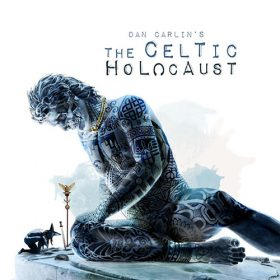 Each episode has its own webpage and artwork. The “Celtic Holocaust” episode’s striking artwork looks like the cover of a book. The page also includes a map of Caesar’s trips through Gaul and a list of “Tribes/Names/Places” with definitions. The first “King of Kings” episode begins with a brief video clip. That’s followed by a list of nearly 30 people and places with definitions. The third Persian episode’s webpage includes a map of the Battle of Plataea and a family tree of the ancient Persian kings. There’s pretty decent content to accompany each episode.

Carlin’s Hardcore History doesn’t follow a sequential timeline, so there’s no way to know what he’ll cover next. And it isn’t all pre-17th century history. Episode 59 looks at the nuclear arms race and asks “What happens if human beings can’t handle the power of their own weaponry?” Episodes 56-58 head back into the ancient world but episodes 50-55 cover World War I. Carlin’s most recent podcast was episode 60, although by the time this posts he may have issued episode 61.

You may view the latest post at http://falconbanner.gladiusinfractus.com/2018/02/28/dan-carlins-hardcore-history-review/ You received this e-mail because you asked to be notified when new updates are posted. Best regards, The Falcon Banner [log in to unmask]
-- Manage your subscription at http://listserv.unl.edu