The Falcon Banner has posted a new item, 'The Passing of Sveinn Njallson' 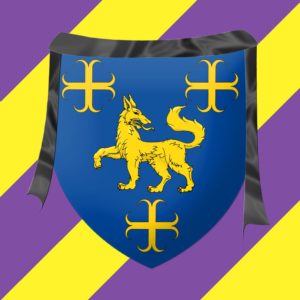 Lord Sveinn Njallson has passed after a valorous battle with 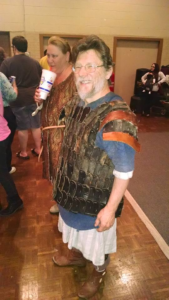 cancer. He is survived by his lady wife, Lady Ragnheiðr Refsdóttir, and his son Kristian. He is preceded by his first wife, Dagny Vigunnsdatter, of blessed memory.

Svein joined the SCA in 1979. Though he could not travel extensively, he was a constant and stalwart member of the Kingdom of Calontir and of the Barony of Three Rivers. He served in the baronial guard for a time, also receiving the Order of Three Rivers Silver and the Baron’s Order of Gallantry.

While he is remembered as a stalwart brother in arms, Sveinn is also remembered as being kind, helpful and welcoming to newcomers, always willing to share his knowledge of Norse lifestyle.  Not seeking the spotlight, he nevertheless worked behind the scenes, quietly and competently, to insure thing ran smoothly.

Sveinn, before his cancer was diagnosed had been coming to B3R equestrian practices regularly and was learning to do mounted combat on our mules. After he was diagnosed and had begun treatment he continued to come to practices and continued to ride for some time even while on harsh Chemo treatments. His refusal to give up doing things he loved (like riding the mules in combat) even when feeling unwell was an inspiration to many of us equestrians in Three Rivers.

In origin, the term chivalry means “horsemanship”, formed in Old French, in the 11th century, from chevalier (horseman, knight). Sveinn showed me he was a horseman and he was full of Chivalry with his bravery. 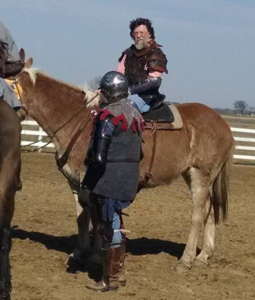 Finally, here is a story shared by Lady Pádraigín an Ein i gh:

Not many know this, as I officially joined SCA later in my life – but I’ve known a very special, wise, clever and amazing man known as Sveinn (Duane Nelson) for a while now.
I was 13 when I met him and his first wife at a NYE party hosted by Jennifer Llewelyn. The funny thing about SCA people is they don’t see a teenager or a toddler, they just see smaller humans and treat them with respect and inquire and show genuine interest. I was f—ing shy when I was 13, and I remember reading this book at the start of the NYE party and Duane came up to me and just started to inquire about the book and talking to me like an adult – a new thing for me to experience. He recommended some authors I might like and to this day, they are some of my favorite authors.
I will never forget heading to my first(ish) event (I was there a total of 3 hours, so I don’t really count it) that same year and every time I saw Duane, he’d always ask how I was doing, was I enjoying myself, had I drank water, you know the typical SCA hospitality questions.
When I officially joined the SCA 6 years ago, I walked up to Duane and asked if he remembered me and he gave me the biggest hug and said, “Welcome Back, of COURSE I remember you.” He was, in part one of the reasons I decided to jump in feet first with the SCA. He was a familiar face in an unknowing crowd and that was always comforting.
A few months ago my goddaughter and I met Duane and Rebecca at Central Reform Congregation for an evening service. Rebeca was walking my goddaughter through the service, as she is planning on converting.
Afterwards we went out to dinner at Ari’s. And I will never forget what Duane said after her ordered the lamb chops: “Always order the lamb chops. Our own lives are fleeting and precious if you want the lamb chops, order the damn lamb chops.”
May Vallhalla greet you with songs and mead a’plenty.

A GoFundMe campaign has been set up to help with final expenses.

You may view the latest post at http://falconbanner.gladiusinfractus.com/2018/03/11/the-passing-of-sveinn-njallson/ You received this e-mail because you asked to be notified when new updates are posted. Best regards, The Falcon Banner [log in to unmask]
-- Manage your subscription at http://listserv.unl.edu