The Falcon Banner has posted a new item, 'Stile Field Battle at Gulf' 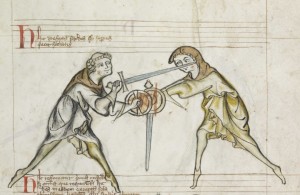 Many of you have heard this already. The lucky ones have lived it. I beg your indulgence for repeating once more the glories of the Calon Host.

At Gulf Wars this year, there were three battles planned: the Town, the Field, and the Ravine. The Town was fought, and lost. The Ravine was flooded. It is of the Field I will now speak.

We gathered upon a Wednesday, fair and sunny. At the appointed hour of 1pm we mustered. With many still weary from the armored battle, our small group started out towards the field, a few stragglers trailing behind. No songs had we this time, but still our banner in front, and a wagon full of water and shields.

We were directed here, then there, as the generals organized their troops and counted the tally. Fourty-some per side, if memory serves. Anthills were active, and we were cautioned accordingly. Our Commander, Master Donald, was given our assignment: to harry and delay the enemy, as the cavalry to our side ran ahead and picked them off.

And delay we did! The first round, we advanced as one; then came the command to fall back. Twice, thrice, we retreated in good order, stringing along our adversary as their flank was picked apart. Then came the call to press, step and step again. Across the field we swept them, across the world’s edge, as our line held and theirs crumbled.

Few fighters we lost that round, and our side’s generals sang the praises of the Calon Host! Our enemies, too, saw our worth, and sent over their Masters to better deal with us in the second round.

We were hard pressed then, and many perished. What little I saw: Uji beset our foe, until he was legged. One reached forth to end him, and in that moment exposed himself to me. I took the shot, before I too was slain. My comrades fought bravely, but as the tide advances, so too the wave of the enemy overtook our lines.

The third and final round then came. Again we advanced, again fell back, and once again, we pressed the line. One by one our fighters fell, until four still stood – Ujimori, shield in hand, and no hand left to hold a sword. Baron Donald, Master of Defense, now defenseless, but still standing. Master Gawin, and a recruit from the West, Ibrahim, still stood with arms. Stepped forward they then with what they had in hand (or with what they did not). Other kingdoms fell in line, and together forced out the foe. A few scattered fighters then remained to be picked off, and the third round was ours!

The Calon Host fought as one, and both sides alike acknowledged our role in the fray.

(Apologies to anyone whose part I remembered incorrectly. Fog of war, and all that.)

You may view the latest post at http://falconbanner.gladiusinfractus.com/2018/03/25/stile-field-battle-at-gulf/ You received this e-mail because you asked to be notified when new updates are posted. Best regards, The Falcon Banner [log in to unmask]
-- Manage your subscription at http://listserv.unl.edu