The Falcon Banner has posted a new item, 'In Memoriam: the Passing of Baroness Elwyn of Fountaingrove' 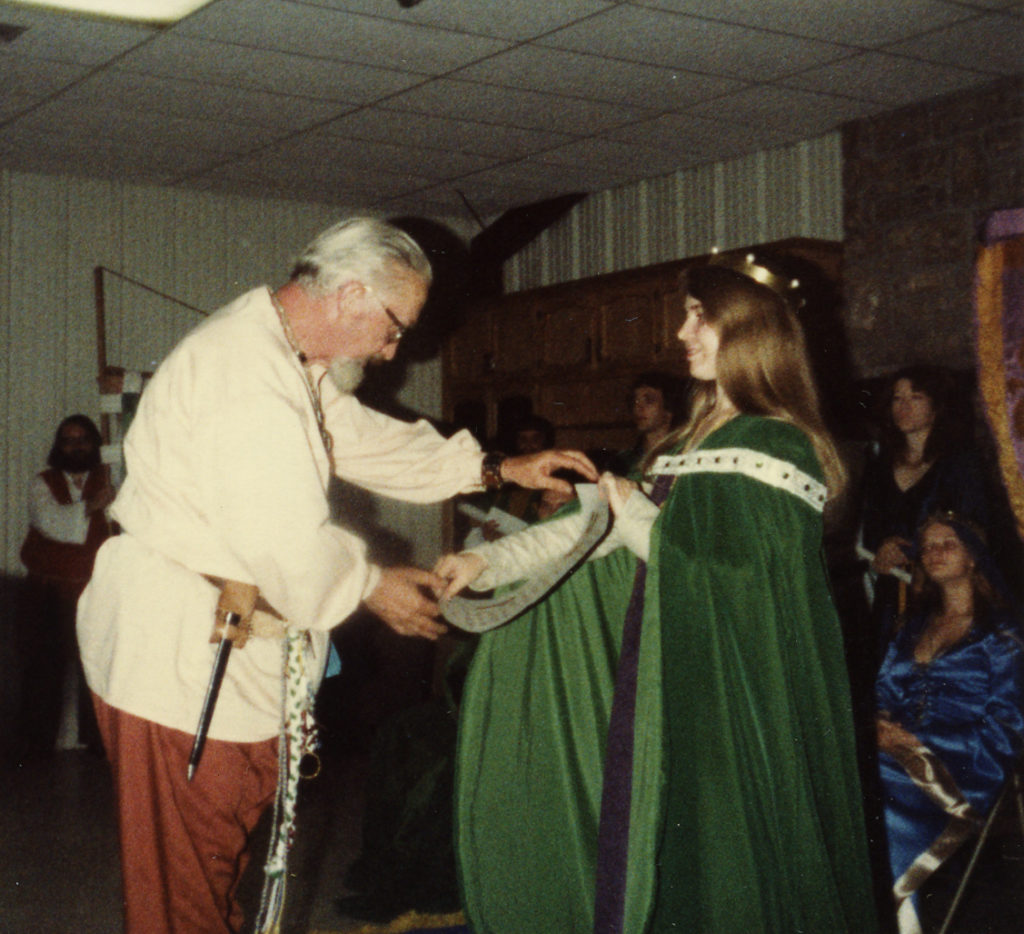 Ed. Note:   Baroness Elwyn of Fountaingrove was the second Baroness of Forgotten Sea; from 1979 to 1983 with HE Morgan Griffith of York, and from 1983 to 1988 with HE Davro son of Davril son of Davin

The photos have been corrected from an earlier version of this post.

Unto the Their Royal Majesties Xersis and BelAnna, Imperator and Imperatrix of Noble Calontir, and to all Peers and Populace of this Land comes these words of remembrance from the pen of Master Mellitus of Rouncivale.

Let candles be lit and let Glimgloria sing “Non Nobis”. Let the bards and historians speak on the deeds of Baroness Elwyn of Fountaingrove.

Baroness Elwyn served Calontir from the earliest days when we were a region of the Middle Kingdom. It is said that she was instrumental in the early growth of Calontir.

Elwyn began her journey in the SCA in the Shire of the Fountains, which would be absorbed into the Shire of Forgotten Sea. Elwyn was awarded arms by King Moonwulf and Queen Zarina of the Middle Kingdom in May of AS XIII.

Elwyn served as Baroness of Forgotten Sea from April of AS XIV to May XXIII. She served with Baron Morgan of York and Baron Davro son of Davril, and under their leadership, Forgotten Sea grew and prospered. Elwyn was the third person invited into the Order of the Cross of Calontir by Warlord Humpk d’Bohunk (HG William Vatavia) in his last court at Calontir’s first Coronet Tourney. King HE Thorvald Anlafsson the Golden and HE Queen Branwyn Whiteraven honored her as a baroness of Their Court when her tenure was done. As Regional and then Principality Seneschal of Calontir, it was her efforts that coordinated our transition from Region to Principality.

Though she has rarely been seen at events in recent years, the work she did so long ago lives on in our Kingdom. Elwyn was known for her singing voice and her love of dance as well as the kindness and generosity she showed to all whom she came across. Many of those who joined the SCA in those early days benefited from her guidance and are now counted as Peers of the Realm. Calontir, honor well the memory of Baroness Elwyn of Fountaingrove for her legacy lives on in you.

You may view the latest post at http://falconbanner.gladiusinfractus.com/2018/08/21/in-memoriam-the-passing-of-baroness-elwyn-of-fountaingrove-2/ You received this e-mail because you asked to be notified when new updates are posted. Best regards, The Falcon Banner [log in to unmask]