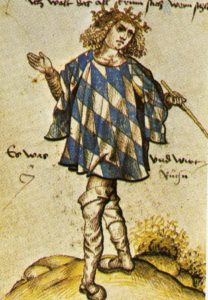 The Armorial has been updated to reflect the items in this LOAR.
In Service,

Æthelred the Well-read:  Name and device. Per chevron argent and sable, two wildcats salient respectant gules and a triquetra argent.

The Letter of Intent argued that byname Well-read is a plausible the lingua Anglica form of the Old English term ge-l{oe’}red. Although this term strictly means “learned” or “erudite,” we give the submitter the benefit of the doubt that “well-read” is a reasonable synonym. If the submitter prefers Æthelred the Learned, he may make a request for reconsideration.

Kathryn dei Fiamma:  Device. Argent, a torteau and on a chief indented azure a roundel between an increscent and a decrescent argent.

There is a step from period practice for the use of a bird displayed other than an eagle.

Sigvarðr Skarfr:  Device. Checky gules and Or, a cormorant’s head erased sable beaked Or transfixed through the neck by an arrow fesswise sable.

The submitter requested authenticity for “England 13th or 14th century.” This name does not meet this request because Cousland is not found that early in English. It is, however, authentic for 16th century England; Jeanne Marie Noir Licorne found Cousland as an unmarked surname in a 1587 London burial record.

The submitter may be interested to known that Cousland is a Scottish place, rather than an English one. AsStephan de Cousland, the name is authentic for 13th century Scotland. If the submitter prefers this form, he may make a request for reconsideration.

Tempest is an attested English given name found in late 16th century York.

Visvamitra Yavana:  Name and device. Azure, an owl argent and in chief a lotus blossom in profile argent.

The submitter requested authenticity for an unspecified time, language or culture. This request was not summarized on the Letter of Intent. Fortunately, Seraphina Ragged Staff identified the authenticity request during commentary, allowing sufficient time for research.

The name elements were documented from the Indian subcontinent. However, we cannot say one way or another whether this is an authentic name from any Indian language or culture. Our resources in those languages and cultures are very limited.

This device is returned for violating SENA A3D2c, Unity of Posture and Orientation, which states “The charges within a charge group should be in either identical postures/orientations or an arrangement that includes posture/orientation” The charges here are not in a unified arrangement, as the arrangement of dragonflies must be blazoned independently of the cinquefoil.

This device conflicts with the badge of Hakon Hrafnsson, Per pall inverted Or, sable, and paly argent and vert. Only two of the three field partitions have changes, so it is not eligible for an SC under SENA A5F2. If considered under SENA A5G1, a maximum of one DC is available through change of half the tincture under SENA A5G1a, as half of the field has changed tincture. A second DC cannot be gained through changing the base portion of the field through A5G1d, as only one third of the field is subdivided and the rule requires that at least half of an already divided field be modified in this manner.

You may view the latest post at http://falconbanner.gladiusinfractus.com/2018/12/28/vert-hawk-herald-results-from-september-2018-loar/ You received this e-mail because you asked to be notified when new updates are posted. Best regards, The Falcon Banner [log in to unmask]