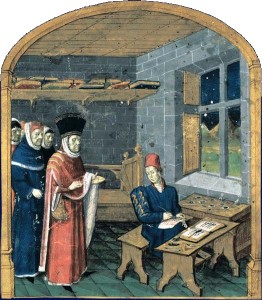 I want to tell you about some changes coming over the next couple of years with the Falcon Banner. How it gets distributed, how it relates to social media, and some of the challenges we as a community need to address.

The Falcon Banner was started as a way to get news about events and people to the large number of Calontiri not on Facebook. I believe we have done a reasonably good job of that. But not as good as we need to. A lot of information is still only being published on Facebook, leaving a lot of people out. We need to do better.

The other independent kingdom gazettes have something The Falcon Banner has never had; a steady stream of information coming in from readers and regional correspondents. They have editors that change off every week, who take that information, follow up to get any needed details, then post it. I am often told by the other editors how amazed they are at what we accomplish at the Falcon Banner. Essentially, it is me acting as editor and correspondent, twisting arms to solicit articles, and Dorcas covering court reports (Thanks Dorcas!)

If you want to keep the Falcon Banner going, that has to change. We don’t need money, we don’t need permanent volunteers (although I won’t turn them down!), but we do need your engagement.

I doubt Calontir is big enough to justify the infrastructure of, say, the East Kingdom Gazette. But we can have readers who feed us stories so we can follow up, edit and publish. Readers as reporters.

That would be you.

You can recommend folks we need to profile. You can submit your A&S projects, class notes, documentation, research papers, late changes to your groups’ events. You can submit a write up of a local event, or a pictorial essay from Pennsic, Gulf, or Estrella. Anything that connects the Kingdom is welcome.

Which brings us to distribution and social media.

I have called for reader involvement before and we have had some excellent feature articles as a result. But, mainly, it has been me stalking Facebook and reposting stuff found there.

So, if that has been working, why make a big push for more reader involvement now?

Because in two years, January 1st, 2021 neither I nor the Falcon Banner will be on Facebook.

This decision came about for a lot of reasons, but the most recent privacy breach was a big one. If this hadn’t been a pattern for Facebook since its beginnings, it might be different. But it is a pattern, as is the deception about it. I could also list the ways that Facebook actively makes it harder to gather and publish information, and to reach an audience. But we know all of that; we have just been putting up with it because “everybody is on Facebook”.

But everybody is not, never has been, and never will be on Facebook. Usage and engagement are declining, advertisers are noticing, regulations are coming and Facebook’s business model is in a slow-motion implosion. If there ever was a reason to make a deal with that particular devil, that reason is becoming less and less compelling.

As I said, we won’t be leaving Facebook for two more years, so you can continue to follow us on the Falcon Banner page there. But, starting April 1, 2019, I will not cross post to the Kingdom Facebook page.

There will continue to be other ways to stay connected to the Falcon Banner.

The most obvious one is to subscribe on the website. That will send you an email notification every time we post, with a link you can follow to the full article. If you use a news reader app, such as Feedly or Flipboard, on your phone, tablet or computer, simply subscribe to our feed. Search for “The Falcon Banner” or manually add the link to our feed: http://falconbanner.gladiusinfractus.com/feed/

Finally, beginning January 1st, 2019, we will launch the Falcon Banner group at MeWe.com. The link to that is group is https://mewe.com/join/thefalconbanner

MeWe is a social media platform that has been around for a few years. The user interface will be very familiar to Facebook users, but their business model is very, very different. They do not collect private data and they do not sell ads. Their motto is #Not4Sale and they seem to mean it. They get their funding by selling additional services, such as more storage space, add-on emoji packs, etc. It is run by leading cyber-privacy advocate Mark Weinstein. With the demise of Google+ it is now the leading social media challenger to Facebook.

This is not an advertisement for MeWe; if they don’t pan out, the Falcon Banner will move someplace else. This is just an explanation of why I think, right now, this is a better platform for the Falcon Banner.

That is an overview of some of the changes coming. I will be sharing more detailed (and hopefully shorter) posts as we move to implement each step, and announce any detours we have to make along the way. Look for these posts as they come out, and they will also be collected on a new page on the site titled The Future Project.

This is going to be a significant journey for the Falcon Banner. I hope you will decide to come along.

You may view the latest post at http://falconbanner.gladiusinfractus.com/2019/01/01/the-future-of-the-falcon-banner/ You received this e-mail because you asked to be notified when new updates are posted. Best regards, The Falcon Banner [log in to unmask]